As if being quarantined for 3 months wasn’t bad enough, this summer started off with a bang when Jett broke his arm on the very first day. 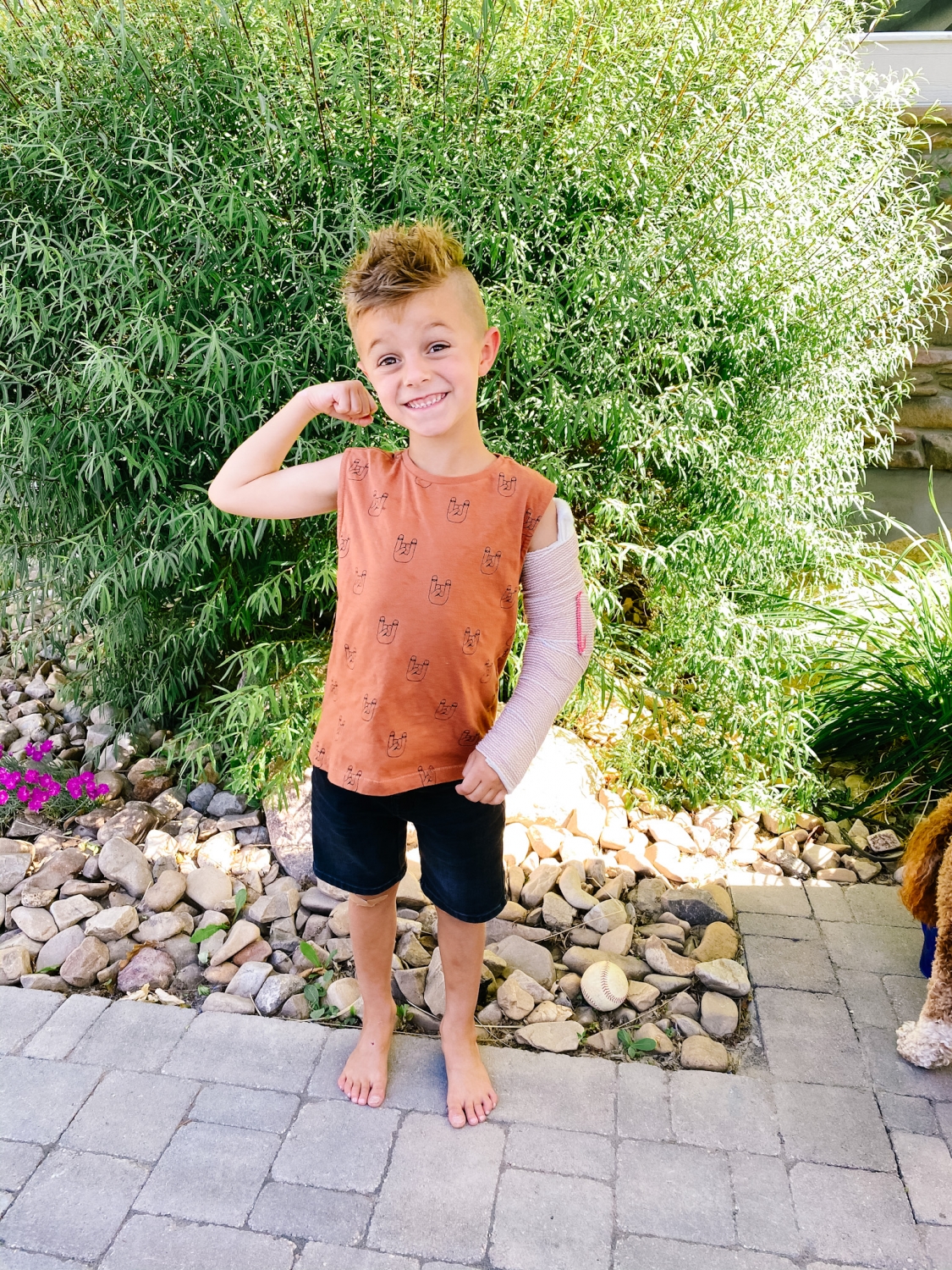 Jett in his soft cast

And it wasn’t just a little break. This guy broke it going into his elbow which made for a tricky fix. Can you imagine being 4 years old and breaking your arm on the FIRST DAY OF SUMMER?!? There aren’t many things worse that can happen in a 4 yr old’s world.

While we were relieved to find out that both the fix and recuperation period were relatively simple and short, we were really disappointed to find out this his type of break and surgery came with additional limitations. 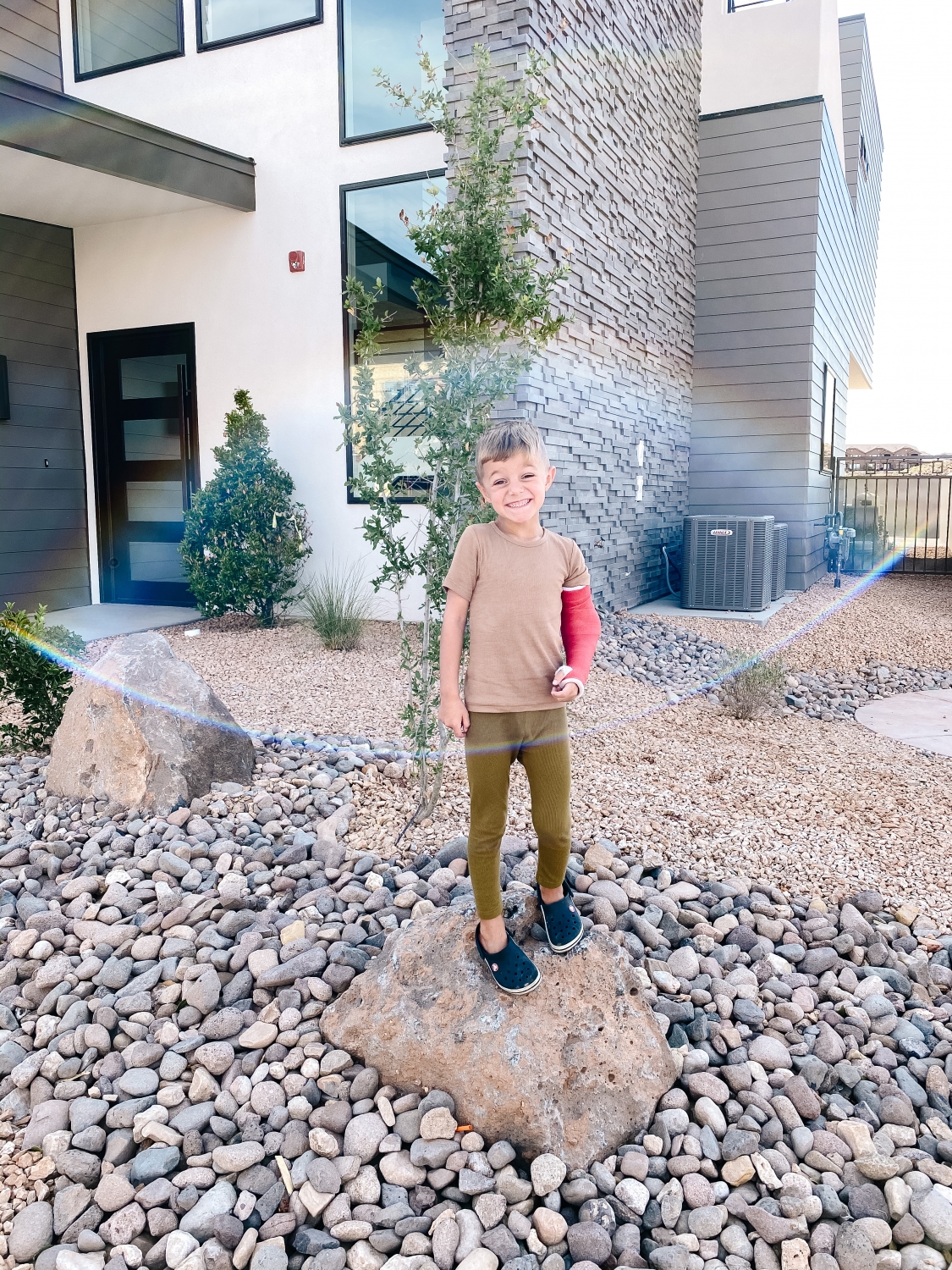 “Get a waterproof cast,” they said… 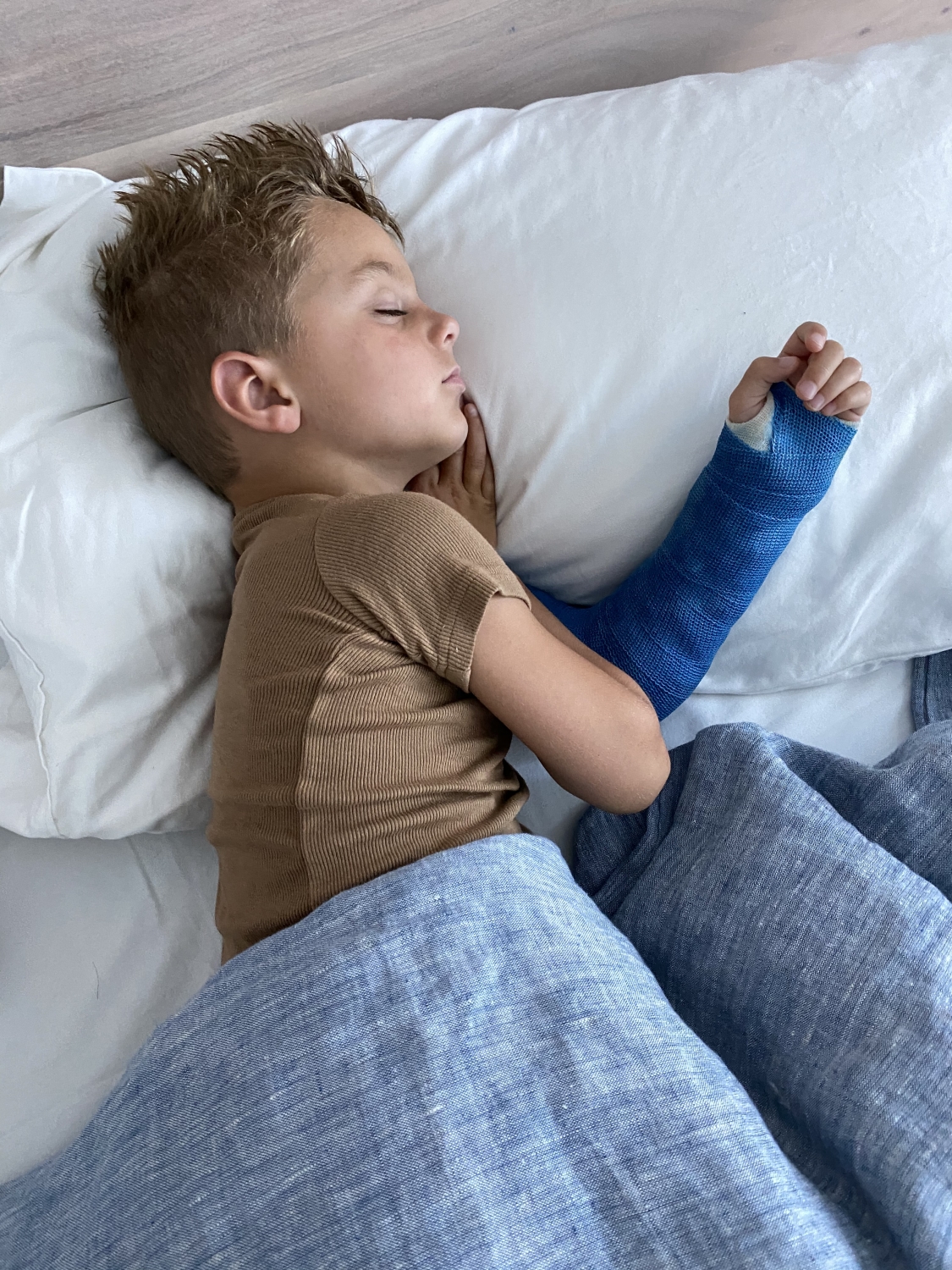 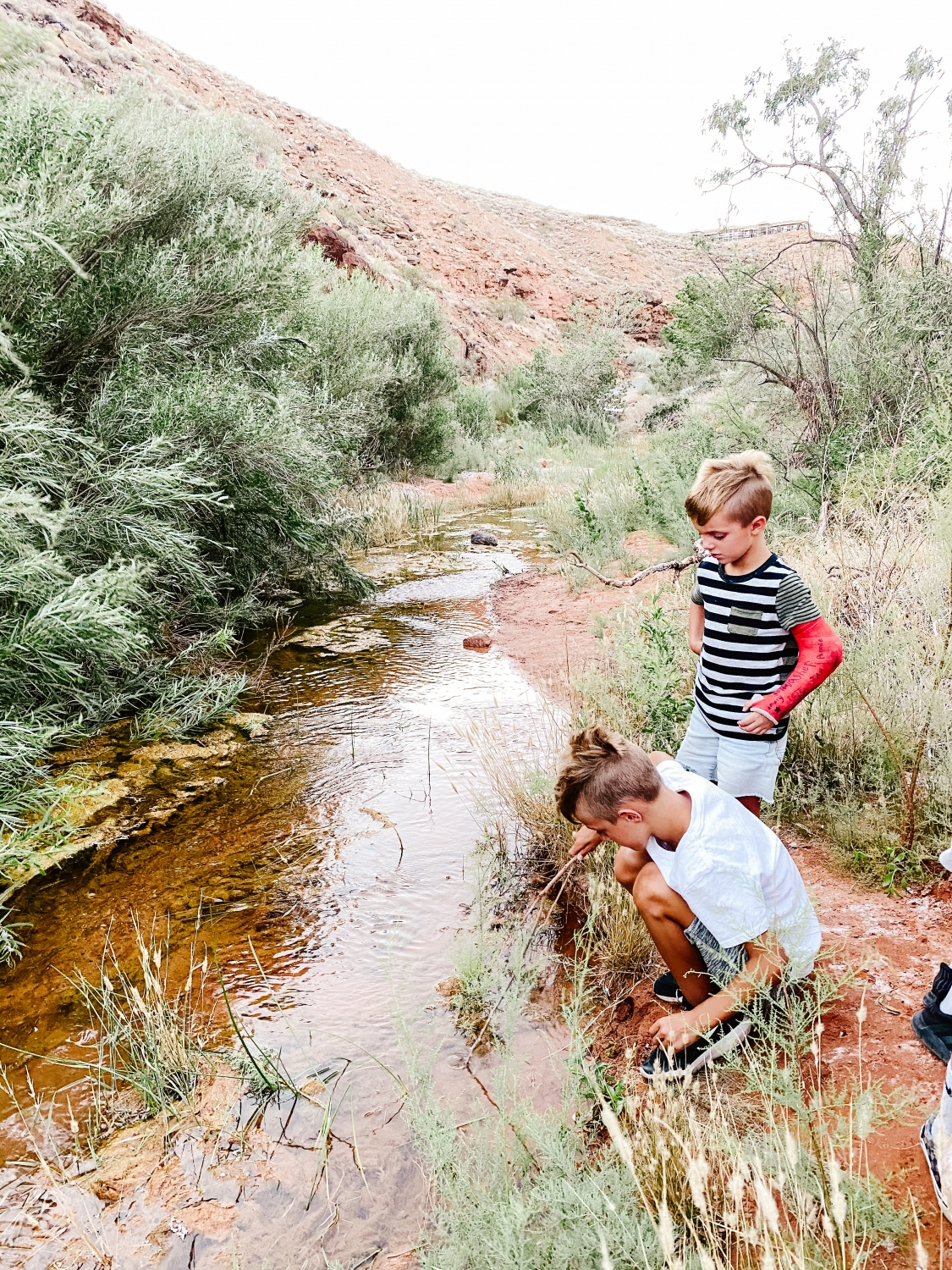 But after finding out we couldn’t get a waterproof cast put on, our surgeon gave me a glimmer of hope. He said that swimming in his non-waterproof cast would be totally fine if we just wrapped the arm up properly and even went on to suggest different cast covers. But when Jett accidentally got his cast wet 3 weeks into wearing it, the nurses at the hospital said that this was a big no-no!

My advice to you? Swim at your own risk. We finally figured it out so hopefully what we did will help you as well!

You’d think the instructions we got about post-cast care would be straightforward. But we had the same issue with different pieces of advice from our health care professionals. When he got his cast off yesterday, his nurse told us no swimming for 5-10 days. And then, his surgeon came in to remove the pins and she said he could swim in ONE HOUR!! They really should get on the same page about post-patient care! Haha

But after being semi-sidelined for a month, we decided to take the surgeon’s advice. 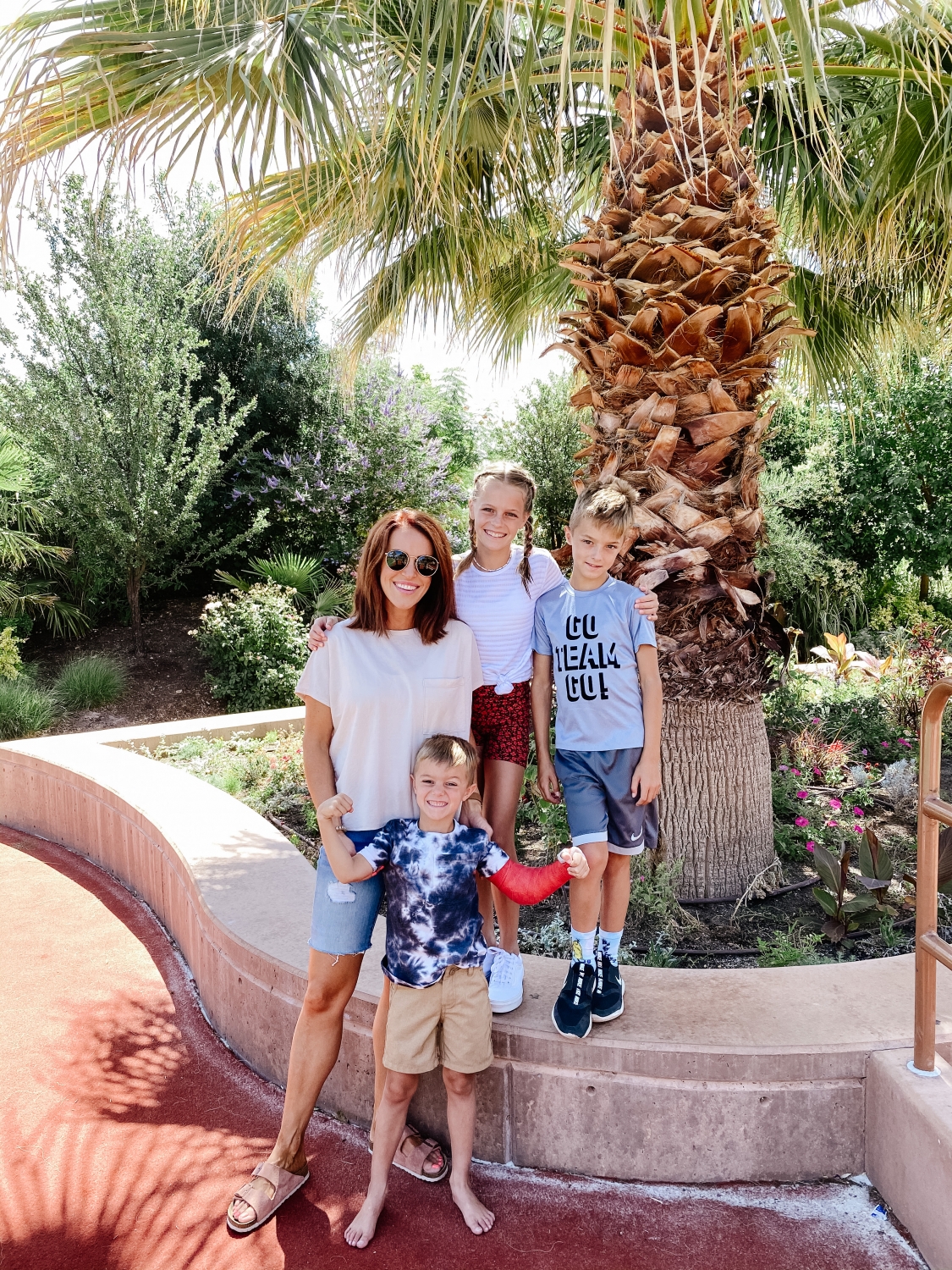 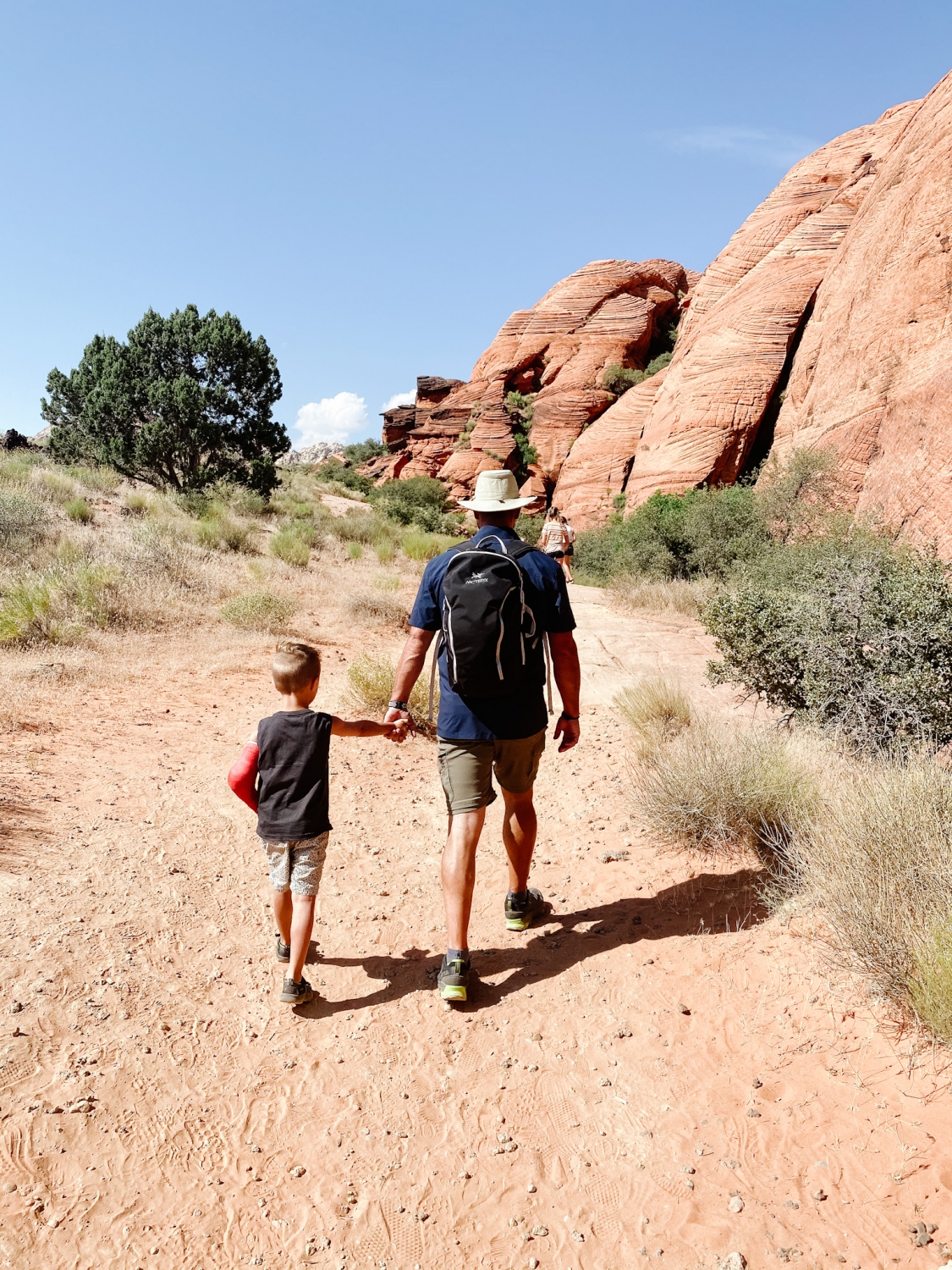 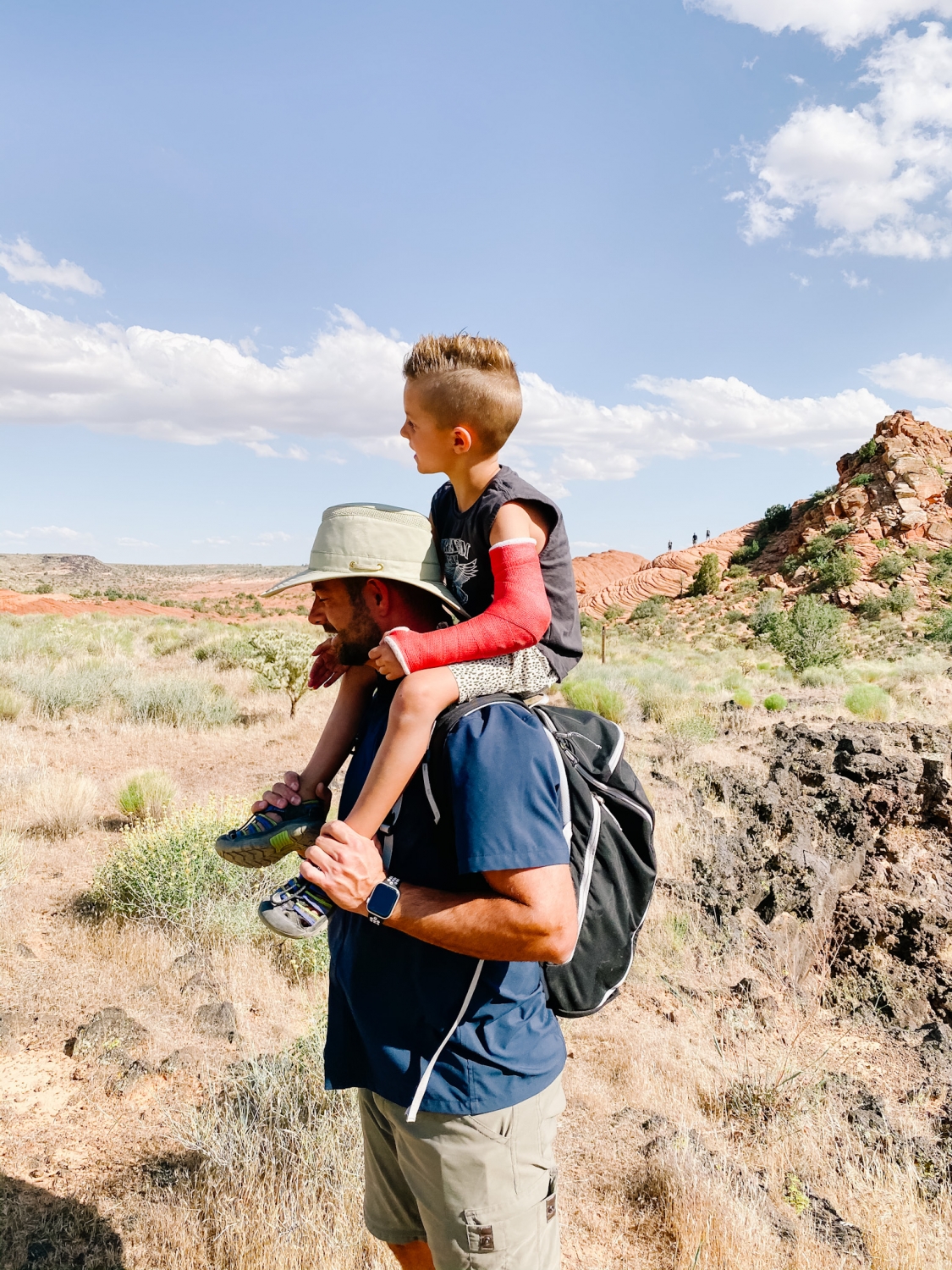 So cast covers are a bit of a joke in my opinion. BUT they allowed Jett to keep swimming which is his favorite thing ever so I’m grateful for them.

We bought 3 of them and I absolutely recommend that you get all 3. One of ours ripped at the start of a week in St. George and I was grateful I had a backup ready to go. So here is our Method (I included a few fails so you can learn from my mistakes… and what we finally got to work!)

1) VACUUM-SEALED CAST COVER: This one suctions the air out. Jett needed an XS. There is a huge size difference between the XS and the Small. Make sure you measure their arm and go off the measurements included on their site.The small was too big on jett (age 4) so if you need one that size but can’t find it on the first link, make sure you check Walmart as well! This one suctions to their arm… like skin-tight suction. You use a bulb to remove all the air from it. If you are going to just get ONE, get this one for sure plus press n seal. 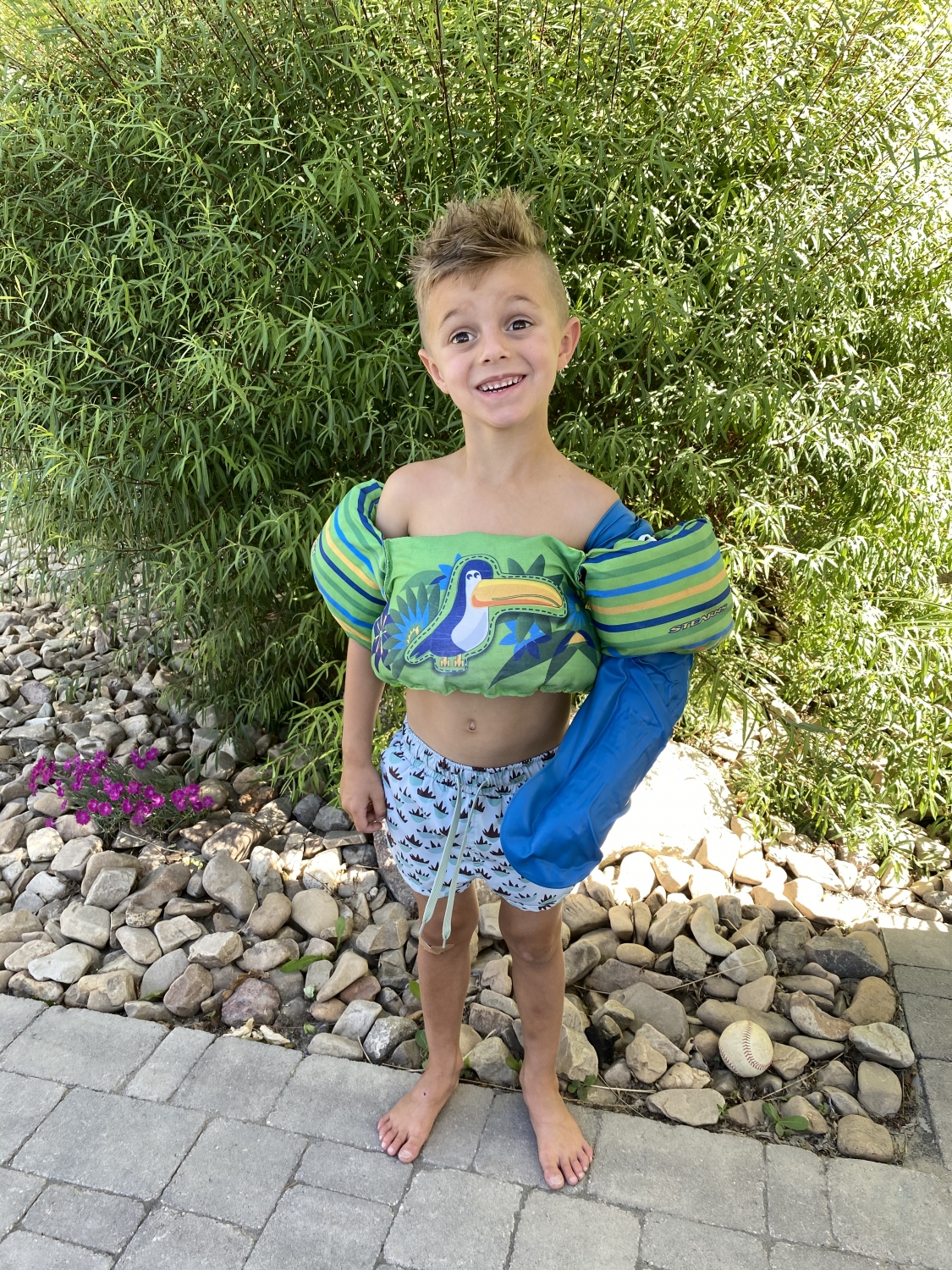 This was the winning combo look!

WATERPROOF CAST COVER: This one came highly suggested. It didn’t work as well as the one above. I ended up doubling up with Jett and he wore this one on top of the one above. This one doesn’t suction to their arm and always had a little water in it when we took it off. But because we had doubled up, the water was on the outside of the first cast cover instead of under it. Totally double up. I would also place this one a little closer to his armpit than the other one.

Toward the end of the month of wearing it, it had a little hole in it too. So depending on how much you swim, keep in mind you may need another.

SHOWERING & BATHING: The ones above work well too but are harder to get on. This one is a breeze to get on but I definitely wouldn’t swim with it. 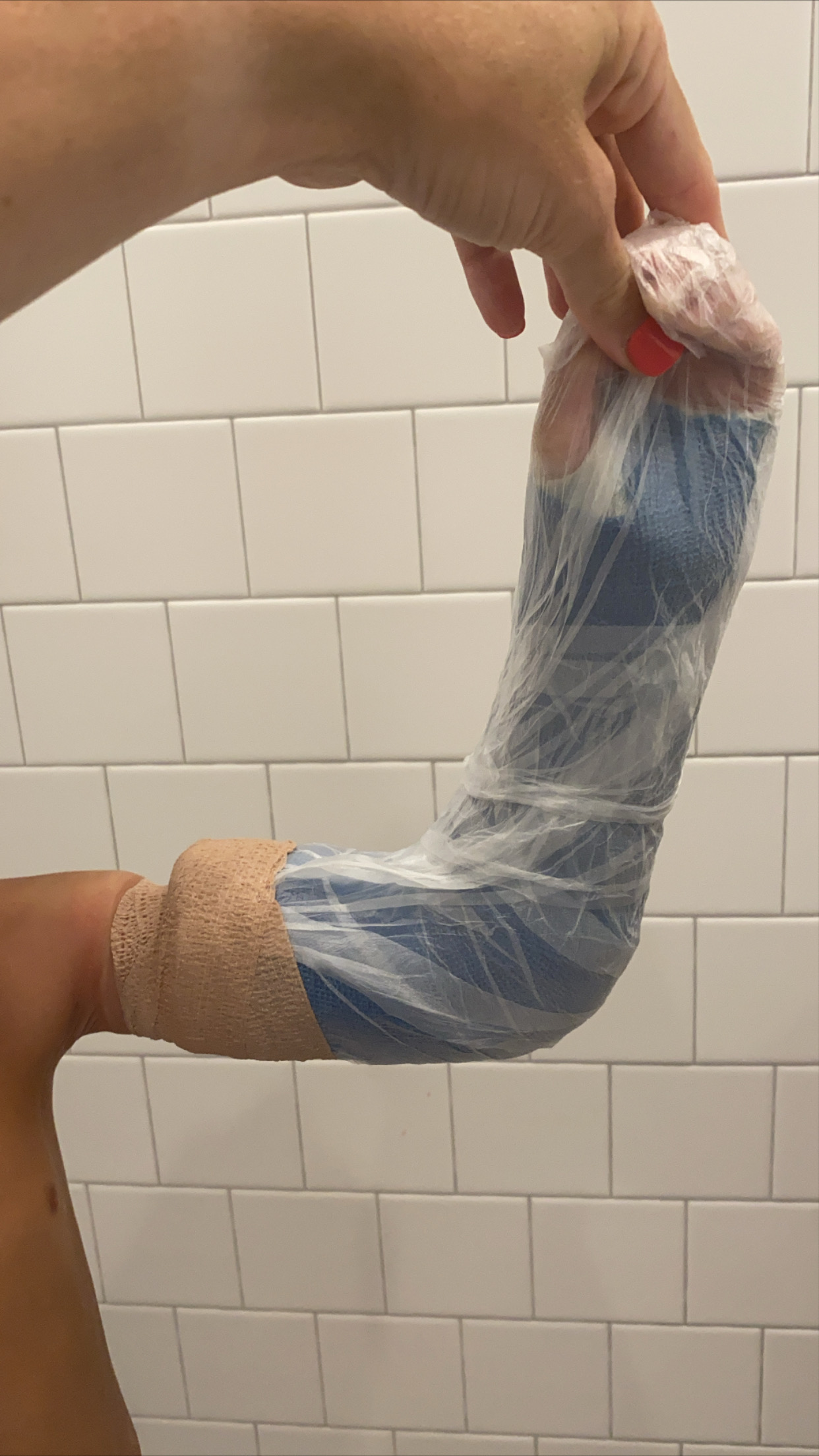 After MUCH trial and error, here is what kept the water out, Jett in the pool but out of the ER:

ATHLETIC TAPE AROUND THE TOP

I know…MAJOR headache. And a quick disclaimer: I don’t know if we had so many issues due to Jett being so young and his arm so teeny or if this is par for the course with waterproof covers. We truly couldn’t find anything to fit his size arm so it felt like we were MacGyvering the arm situation each time.

BUT he swam every day for the last week of having a cast and we had zero water issues. Hallelujah!

What To Do If You Do Get Your Cast Wet… 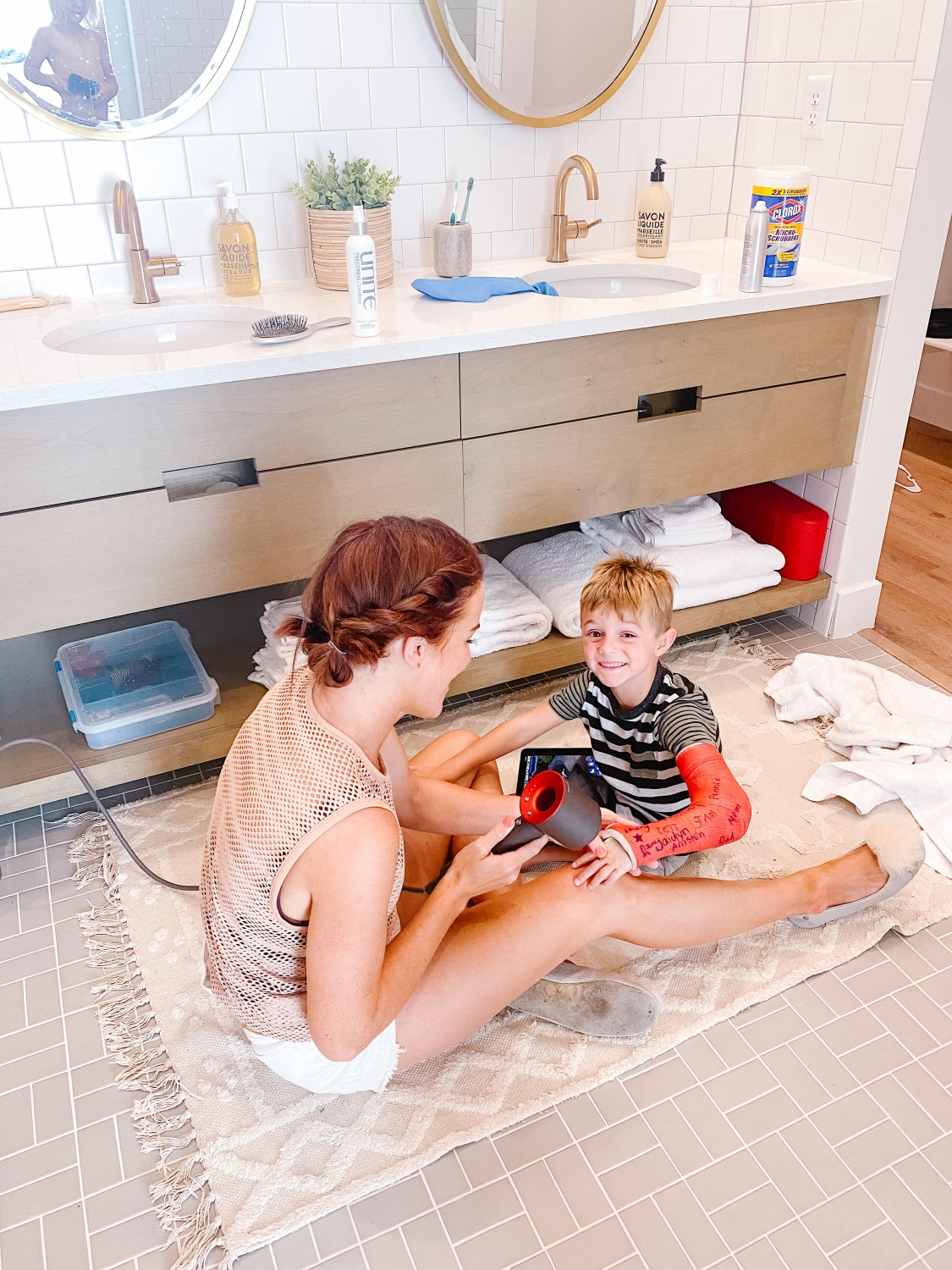 It happens. But call your doctor right away. They had us come in immediately and we got it swapped out. It’s usually covered by insurance and should be changed for free. Secondly, get it as dry as you possibly can. Turn it on high and shoot COOL air down into the cast as best you can! 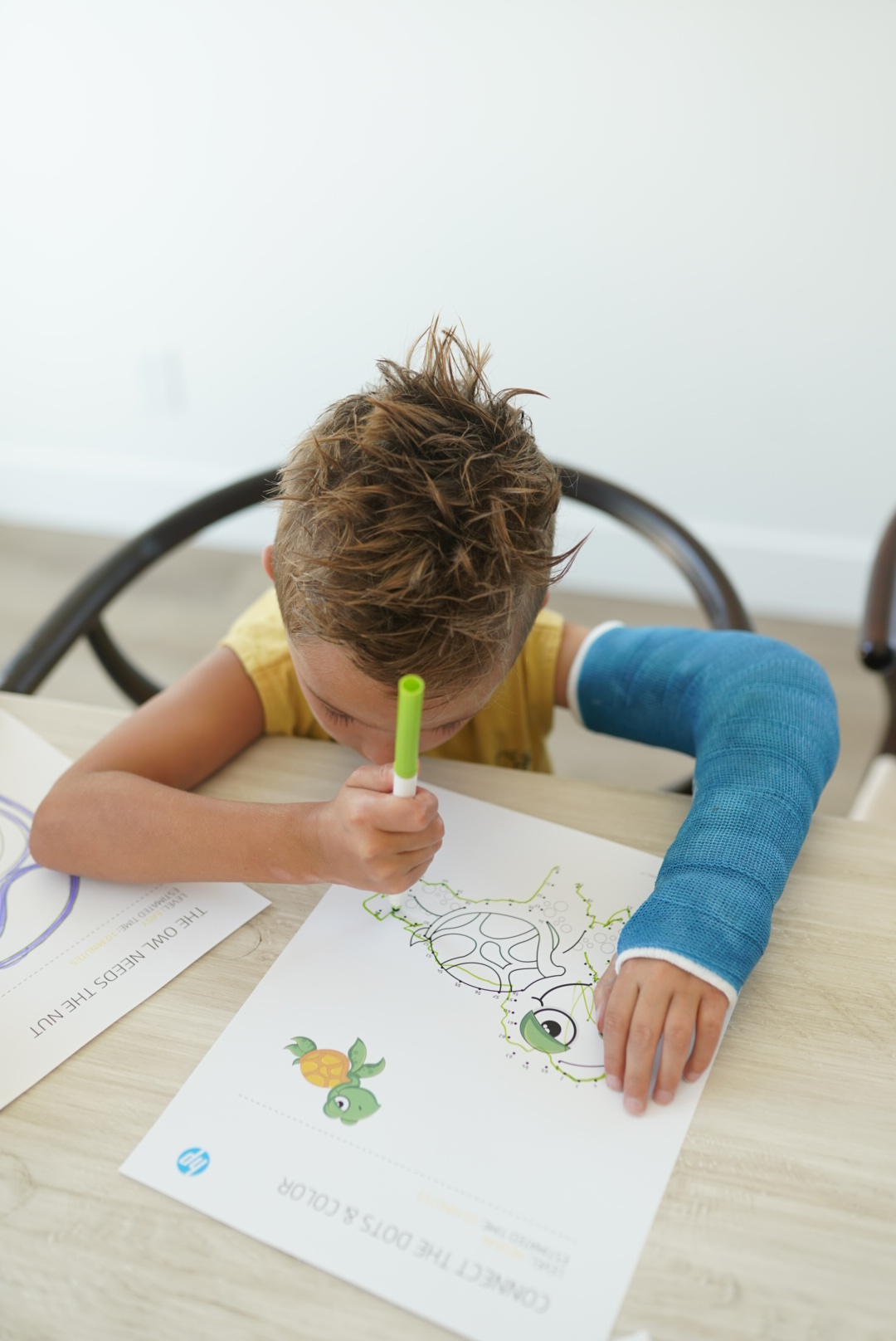 At the end of the day, Jett’s cast didn’t get in his way too often or too much. He went hiking, played indoors, swam, and really kept up with the other kids pretty well! Let me know if you have any questions about sizing or supplies! 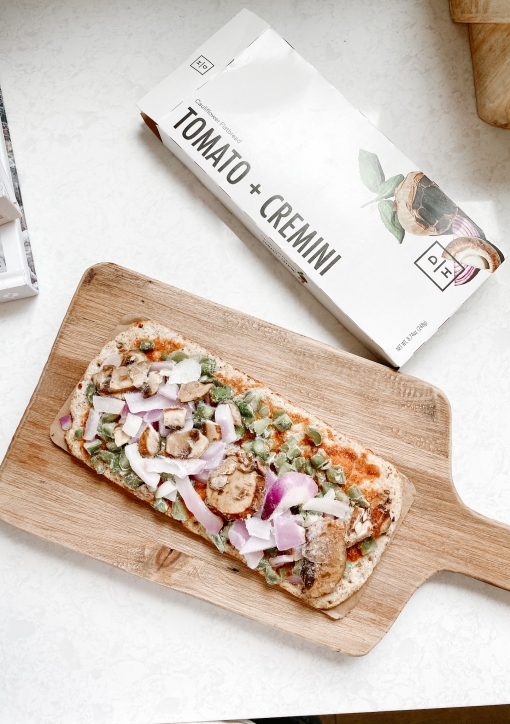 This post is sponsored y Daily Harvest If you’re a woman, you’ve probably had a... 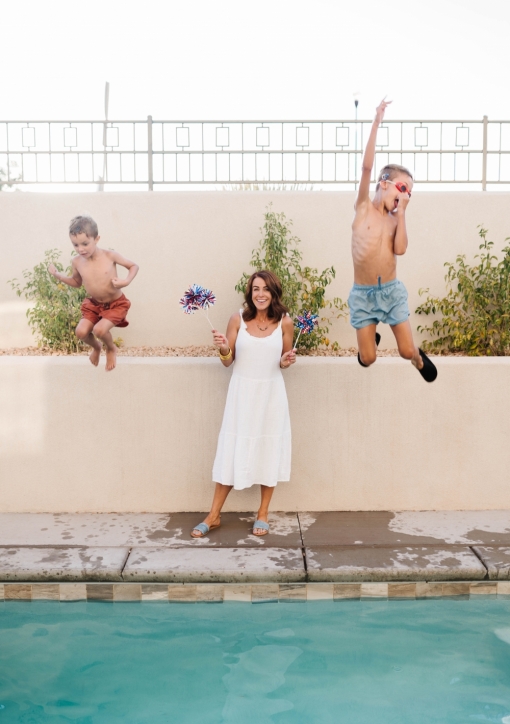 This post is sponsored by Walmart I’ve thought about this quite a bit and... 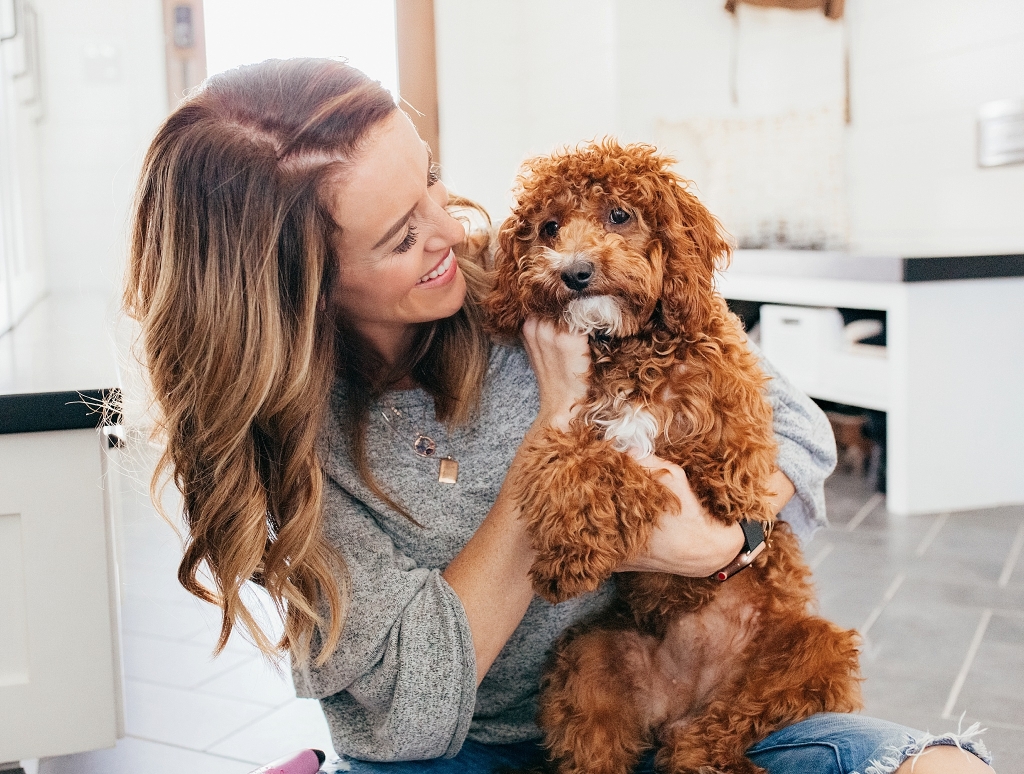