I film this every now and then and post it up for you.. but so many of you ask me to save it, with links + step by step! haha. So I figured throwing it together in a blog would be the easiest way and then it’ll always be here (and easy for me to edit of something changes). If you’re a makeup expert, please know that I know I do some of these steps way out of order. I probably won’t change it either. 😂

I love love loveeeee this TULA primer. They just barely came out with the redesign of it last year and it’s been my go-to since. It is the very last step of my skincare routine/first of my makeup routine. There’s a couple shade options and finish to choose from. I like the tinted one the best, because it provides a little extra glow.. but if that’s not your thing they have a normal one that’s just super hydrating + preps your pores! 🙂 My code there is TARA + it’s 20% off anything site-wide (including pre-discounted sets!!)

Recently I’ve shaken things up and I’m loving my new combo! I really do not like a heavy foundation.. it always looks cakey on my skin and if it’s heavy it brings acne almost immediately. My favorite is the Shine BB cream. I wear the shade indestructible — they color match right in DMs which is AMAZING! You just send them a picture in good, natural lighting and they’ll send you over your shade. My code with them is TARA for 10% off! I’ve been mixing this with equal parts of the Saie highlighter in Champagne. It gives the prettiest glow! I apply it all with an Artis brush (I’ve had for two years and still incredible).. so to recap:

I would like to preface this one by saying I ALWAYS have a little bit of self tanner on my face. At all times. I apply the Red Aspen tanner with the kabuki brush they have on my contour areas every time I reapply tanner. PS – I apply is OVER my moisturizer so it doesn’t go on super heavily. Don’t be scared of the harsh lines when you apply either, it will wash off and look natural! They have awesome, clean face drops too 🙂

I use the Breezy Cream Bronzer in the shade Saychelles from Tarte! If you’ve never used a cream bronzer before it takes a few tries to get used to it, but I love how buildable it is. It’s made with stuff like hyaluronic acid – which is basically ultra hydrating for your skin vs. a powder which pulls moisture from your skin. It’s SO dang important when having makeup on that your face retains moisture or it’s gonna get weird. Anyway, I do have a code for the entire Tarte website!! TARA15

I have a couple of faves for blush.. If you’re looking to stick mostly from one company, a lot of my stuff comes from Shine so that will make it easy. I really like the Shine Blush Stick. They have four colors, and there isn’t a bad one in there. You can also use it on your eyes and lips which is pretty cool! My code is TARA for 10% off.

The other one I like is the ilia cream blush + lip tint stick. It’s also buildable, which is nice. I like the colors “all of me” and “I put a spell on you”.. neither are shimmery!

Ultracreamy Shape Tape. Always and forever. The original kind and my skin do not work.. it looks dry and gross. haha. The ultra creamy has been a solid go to since the day they launched it (well, before because I helped test it!!). I apply with their concealer brush. This is new – and I reallllly like the way it applies vs. the tip that comes on the bottle. TARA15 works site wide 🙂

Recently I’ve been playing around with some DIY At-Home lashes.. I’ll be able to speak to them more I think when I go to re-apply. So far they’ve been good though! I was able to get a code with them: TARA for 10% off.

However, my normal go to is a tubing mascara. It’s also the only type of mascara I let my girls use. The best one I’ve found is a $10 drugstore one! I’ve shared it for years, and have tried so many others but this one is definitely the best. You can get it on amazon, target, walmart, etc.

I also use the DIME lash serum on them for growth (code TARA20)!

We all know I dye them. But that’s really just not enough. It is on like day 1 post-dye but.. it fades just like my roots do! I also use the DIME brow serum on them for growth (code TARA20)!

It’s pretty hard to find a good auburn/red brow anything to be honest.. I just finally at the end of last year found one I really love.. it’s the Urban Decay inked brow in gingersnap. I wouldn’t say it lasts the full 60 hours. but it’s at least two full days before any starts to wear. I also use cleansing balm and wash my face and use retinol, so that doesn’t help haha! The one I used before this was the Anastasia brown in auburn.

I really don’t use a ton, because I mix the Saie highlighter in Champagne in with my foundation! But I just barely started using this palette from Christian Dior. It has a few different tones in it + the pink one would be a cute blush color!

I’ve also shared this eyeshadow primer by MAC for a long time too.. tried + true!! I only use the shades painterly or soft ochre. Soft ochre cancels more redness.

The Red Aspen Fulfilled palette is what you see me wearing nearly every single day. It’s so good and lasts forever. It’s super pigmented, and there’s no fall out during the day and also no creasing. However, the new Shine palette is WAY cute and I’ve been trying it out here and there. It’s a good one too!! Code TARA will save you 10% there.

As you probably have heard me say, I collabed with Shine a couple of times.. the first to create a couple of colors in my favorite gloss they made (goals + bloom) – and then a second time to create an entire new formula with them (lip velvet – in the initial 5 colors!). My most worn lip product is still by FAR goals gloss by Shine. Code TARA saves you 10% there! 🙂

Juicy Lips – ALL versions of it are awesome. You guys hear me talk about this all the time.. My girls really love it too. They recently came out with the plumping + cream version and they’re all so good! If you’re buying on their site – code TARA15 will work + stack on any bundles they have. Their lip therapy mask is also awesome in the shade Strawberry Milk..

Dior Lip Oil – I haven’t had a bad color in this, either. It’s awesome.

That was a lot of info, but, those are all my tried and true faves. Most I have been using for a pretty long time and I’m still loving them!! Hope that gives you some inspo – most things I have a code for, which will also help if you’re starting over and buying a bunch of new stuff. Makeup can be expensive, especially to buy all at once! 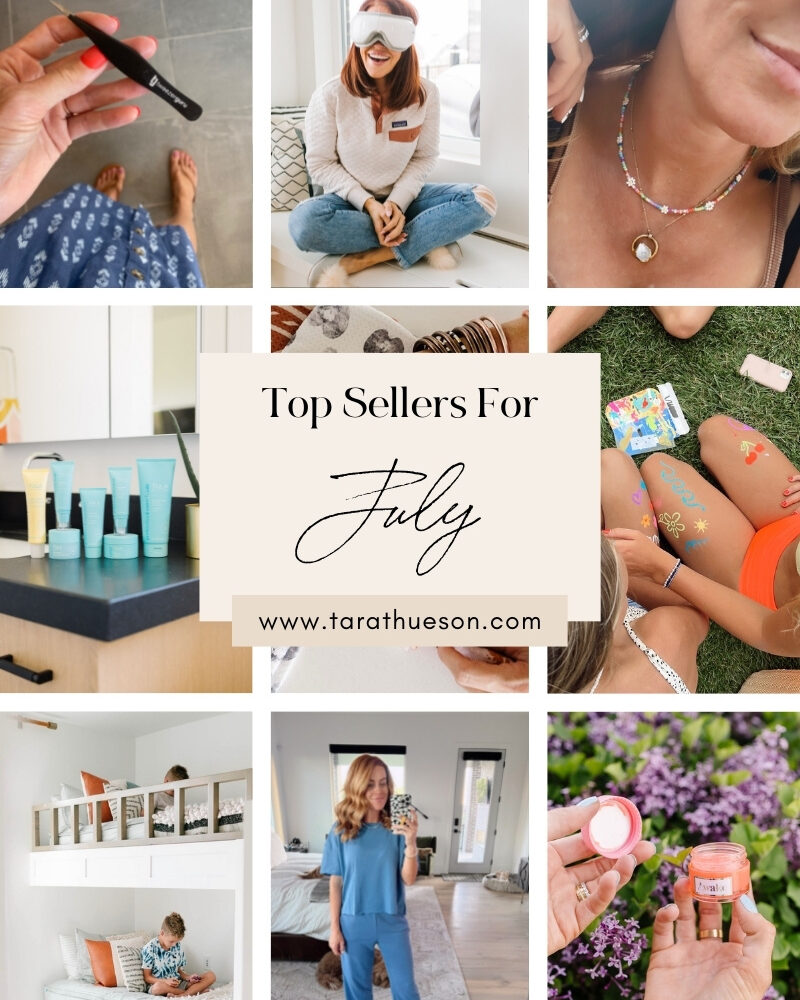 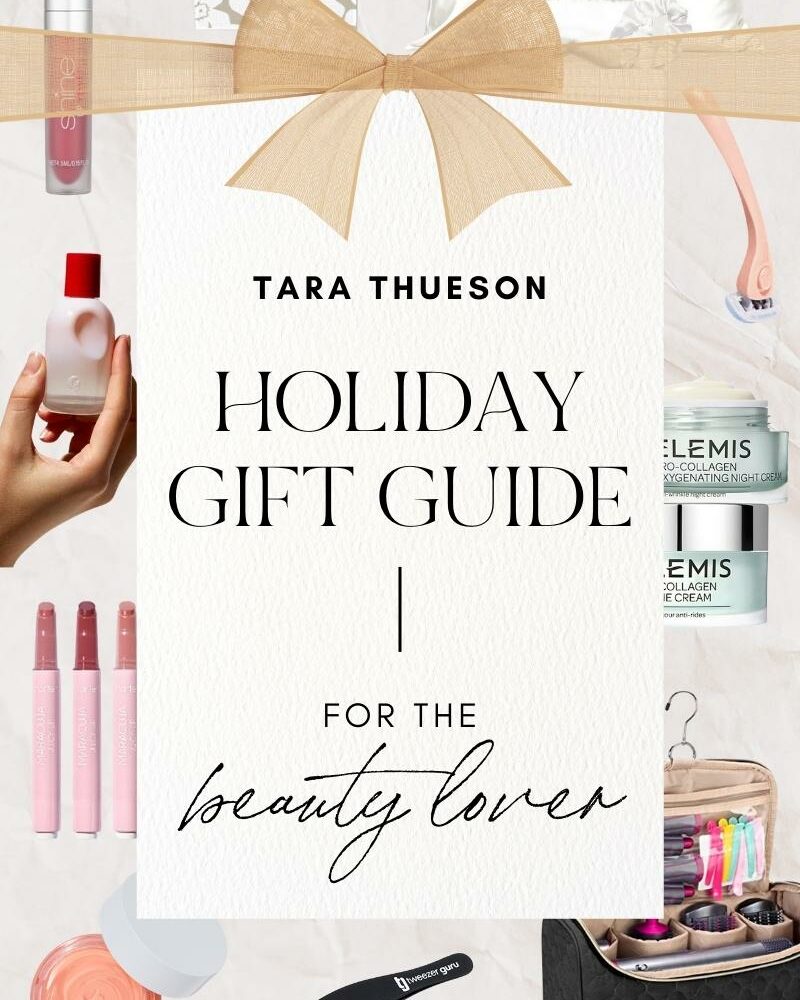